Posted by James Maloch from huffingtonpost.co.uk·Jul 22 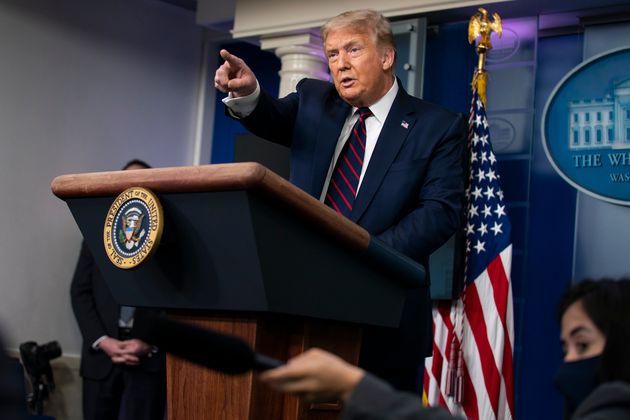 Donald Trump finally admitted that the Covid-19 pandemic would get worse in the US before getting better after months of resisting making a nationwide call for masks and pushing for schools and businesses to reopen.

“It will get worse before it gets better,” Trump said during a briefing Tuesday of the resurgence of the coronavirus across the country. “That’s something I don’t like saying, but it is.”

Trump also urged people in the US to wear masks for the first time during a live press conference, though he did not issue a national mandate.

“We’re asking everybody that, when you’re not able to socially distance, wear a mask,” Trump said. “Whether you like the mask or not, they have an impact. They have an effect. We need everything we can get.”

However, Trump later claimed that the “virus will disappear” without providing proof.

This was the first time Trump has spoken at a White House task force coronavirus update since late April when the death toll in the US was nearing 55,000. As of Tuesday, the death toll was over 140,000 people, and there had been 3.8 million coronavirus cases reported in the US.

The president started the press conference by referring to the virus as the “China virus,” a phrase many have pointed out is offensive, and later blamed China for not stopping the spread of the pandemic.

While Trump praised himself for shutting down travel into the US earlier in the pandemic, he didn’t mention the administration’s failures, such as its inability to equip doctors with protective gear as the virus spread earlier this year.

Trump also made no mention of his efforts to reopen the US economy despite the public health threat posed by the virus.

He did highlight a surge of cases in Southern states and praised Florida governor Ron DeSantis for his handling of the outbreak. (Florida is experiencing an extreme surge in cases and DeSantis has yet to issue a statewide face mask mandate.)

“We have embers and fires. We have big fires. Unfortunately, now Florida is in a little tough, or in a big tough position. You have a great governor there,” Trump said.

On Twitter, many people were surprised by Trump’s response when a reporter asked him about Ghislaine Maxwell, a British socialite who was arrested and charged with helping bring young girls to Jeffrey Epstein for sexual exploitation.

Trump noted that he had met Maxwell “numerous times,” adding that she lived in Palm Beach, but he also said he hadn’t been following the case.