Bioprocess containers are single-use flexible container systems that are utilized in the upstream and downstream processes for sterile liquid-handling applications in the biopharmaceutical industry. These containers are employed in the preparation of cell-media and are a cost-effective alternative to conventional stainless-steel systems. 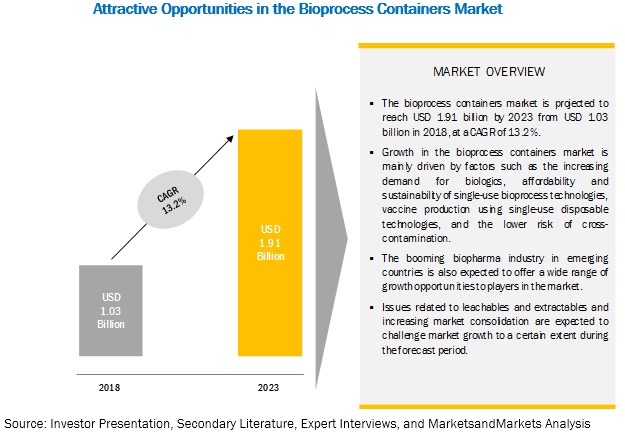 Growth in the bioprocess containers market is mainly driven by factors such as the increasing demand for biologics, affordability and sustainability of single-use bioprocess technologies, vaccine production using single-use disposable technologies, and the lower risk of cross-contamination. The booming biopharma industry in emerging countries is also expected to offer a wide range of growth opportunities to players in the market. On the other hand, issues related to leachable and extractables and increasing market consolidation are expected to challenge market growth to a certain extent during the forecast period.

Market Dynamics
Driver: Rising Demand for Low-Cost Biologic Drugs
At present, there is a rising demand for low-cost biologic drugs. A major factor driving the biologics market is the rapidly increasing global geriatric population. According to the US Census Bureau, in 2015, an estimated 8.5% (or 617.1 million individuals) of the global population was aged 65 years and older; by 2030, this figure is estimated to reach 22%. In the same year, the aging population accounted for 18.6% of the total population in the US and 18.9% of the total population in Europe. With growth in the aging population across major markets globally, the demand for biopharmaceuticals is expected to increase as the elderly are more prone to diseases such as diabetes, hypertension, musculoskeletal and cardiovascular diseases, chronic kidney diseases, stroke, and cancer.

Opportunity: Booming Emerging Markets
China, India, Japan, Korea, and Brazil are emerging markets for single use bioprocessing systems. These markets lack proper standards and government regulations and thus offer significant growth potential for providers that are unable to meet the stringent regulatory standards in the US and European Union (EU). High investments in bio-manufacturing infrastructures are another key factor responsible for the high-growth potential of these markets. For instance, in November 2014, Amgen announced the opening of a USD 200-million bio-manufacturing facility in Singapore to expand its bio-manufacturing capabilities for monoclonal antibodies. For this facility, Amgen adopted single-use systems in 90% of the plant’s operations.

North America is estimated to command the largest share of the market
North America accounted for the largest share of this market in 2017, followed by Europe. The rising demand for biopharmaceuticals and advantages associated with the use of bioprocess bags such as their energy efficiency, decreased risk of product cross contamination, and fast implementation are driving the adoption of bioprocess containers in North America. The US accounted for the largest share of the North American bioprocess market in 2017. The growing focus on biopharmaceutical production is a major driver for this market. Government support for novel biologics production has triggered R&D activity in the country, thereby making it an attractive destination for biologics manufacturing.

When it comes to hacking societies, Russia remains the master at sowing discord and disinformation online