Edge Canary is the new and the latest browser by Microsoft. The developers are adding some amazing features to make it more attractive for users. In the latest features for the Edge Canary, there is a section that asks you to use this browser as the default browser. But you have the option to choose it only if you want to use it. 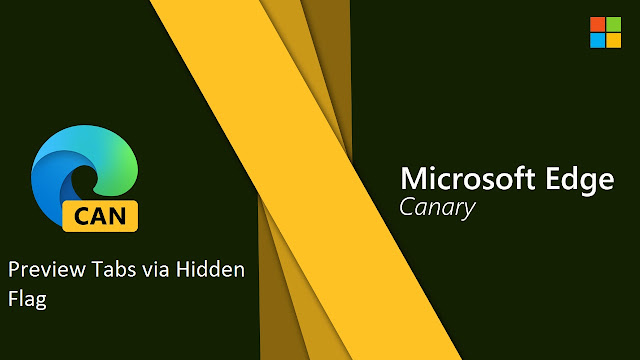 Recently, Microsoft has released a new feature for the Edge Canary Channel users through the v86.0.593.0. It comes with the latest “Tab Preview” feature.

Tab Preview feature can prove to be extremely useful for many users. The feature allows you to preview the thumbnail of the page when you move the pointer of the mouse over that specific tab. Microsoft hasn’t activated this feature for all the Edge Canary Channel users yet. So, there are chances that the feature won’t work for everyone.

The recent update is also considered the experimental flag that can allow you to view the tab’s snapshots. If you hover over the tab, you can view the page URL, page title, and small image or thumbnail that can give you a glimpse of that particular page. Users may not think of it as an innovation, as it was first available in Opera, and then it was a part of the Legacy Edge.

The tab preview feature is also not the latest feature for the Chromium-based browsers. The feature was first spotted last year in the Chrome Canary. Currently, the stable version of Chrome allows the users to preview the page and also has the ability to use the “Hover Card Image” as like the Edge Legacy.

All Edge versions, excluding Canary, already have the hidden flag with the label of “Tab Hover Cards” that lets the users replace the tooltip. But the Canary version of the Edge has included the feature “Tab Hover Card Images” that can allow you to preview the images.

If you want to use or try this feature, then you can go to the edge://flags/ page. From there, search for “Tab Hover Card Images” and the “Tab Hover Card” options. Now enable both the options and relaunch the browser. But you have to note one thing that the preview feature is temporary as like Edge Legacy.

It is also known that Google has been working on this feature. These hidden flags are also present in the stable version of Chrome. But the company hasn’t implemented the feature in their browser completely.

How I stick my hair system and style it at home

5 Successful Website Optimization Stratgeies That Will Change Your Web Game

Pixar Released the Trailer of Soul and Voice Cast Announced

Play These Outstanding Card Games on Your Android Device