We’re here to guide you through the coronavirus pandemic. Sign up to the Life newsletter for daily tips, advice, how-tos and escapism.

When they first met, on a blind date back in July 2016, Harry and Meghan found themselves bonding over a shared love of humanitarian work. Their third date was a “huge leap” because they found themselves, on Harry’s invitation, camping under the stars in Botswana, where the prince is a patron of the animal welfare charity Rhino Conservation Botswana.

Meghan and Harry have their own particular areas of focus on matters of philanthropy and social change, but they also share a number of concerns. Meghan, for example, has been an advocate for women’s rights since long before she was married, and it seems Harry, too, has fully embraced identifying as a feminist.

In a conversation presented exclusively by MAKERS, which, alongside HuffPost, is owned by Verizon Media, the Duchess of Sussex sat down with feminist icon Gloria Steinem for a little “backyard chat” in California. Sitting six feet apart, with the Duke and Duchess’ new Santa Barbara home standing majestically in the background, they talked about representation and the importance of voting, until the conversation turned, briefly, to Harry.

“Well,” Steinem said, “you can be a feminist and be masculine and a guy.”

“Like my husband! I love that when he just came in he said, ‘You know that I’m a feminist, too, right Gloria? It’s really important to me that you know that,’” Markle said. “I look at our son and what a beautiful example that he gets to grow up with a father who is so comfortable owning that as part of his own self-identification. That there’s no shame in being someone who advocates for fundamental human rights for everyone, which, of course, includes women.”

“And also that he is a nurturing father,” Steinem replied. “Because then your son will grow up knowing it’s okay to be loving and nurturing.”

Harry being open about his feminism isn’t new, per se. In 2013, for example, at the Nepal Girl Summit in Kathmandu, the prince gave a speech about women’s empowerment.

“While the unique challenges faced by girls is not a topic I have spoken much about in the past, I think it’s important to acknowledge something that has become obvious to me and is already known to everyone in this room: There are way too many obstacles between girls and the opportunities they deserve,” he said. “It cannot just be women who speak up for girls. 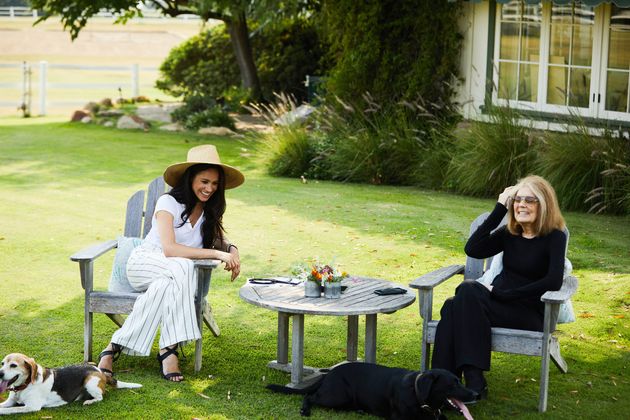 Oh, and of course there was that time when a fan of the royal family, at Cardiff castle in 2018, told Markle that she thought it was “really lovely to have a feminist in the royal family,” to which Markle responded: “Thank you. [Harry’s] a feminist, too!”

Markle has previously talked about wanting to raise her baby, regardless of its gender, to be a feminist. In 2019, when she was still pregnant with baby Archie, the Duchess joined a number of influential women on a panel for International Women’s Day. When asked how the pregnancy was going, she shared a moment that had recently moved her.

“It’s funny, I’d actually been joking these past few weeks; I’d seen this documentary on Netflix about feminism and one of the things they said during pregnancy was, ‘I feel the embryonic kicking of feminism,’” she said. “I loved that. So boy or girl, whatever it is, we hope that’s the case.”

And the following month, a source close to the couple said they were planning to raise their baby without gender stereotyping — that the nursery wouldn’t be filled with toy trains and cars if it happened to be a boy.

Well, as it happened, they did have a boy, and, like Markle told Steinem, that boy seems to have a pretty good example of a father. During a roundtable discussion about gender equality in October 2019, at the One Young World Summit, Harry made a surprise appearance.

“In terms of gender equality, which is something I have championed for a long time, I think that conversation can’t happen without men being a part of it,” Markle said. “You can’t have a conversation of women’s empowerment with just women….Thank you for letting [Harry] crash the party.”

It's official - Prince Harry is a feminist, Meghan Markle revealed today. Jessica Phillips, 23, told Meghan she loved having a feminist in the Royal Family. pic.twitter.com/Ve2jguL5Yi

Well, it looks like baby Archie will be growing up in a home with two beautiful examples of feminist parents — a home where the tough stuff, some of the most important social issues of our world, is tackled head-on, rather than avoided.

Who knows how it’ll enrich his perspective on life when he grows up.

Fitness Equipment Market by Global Demand and Outlook 2020 to 2030