Posted by Eddie Cox from huffingtonpost.co.uk·Aug 29 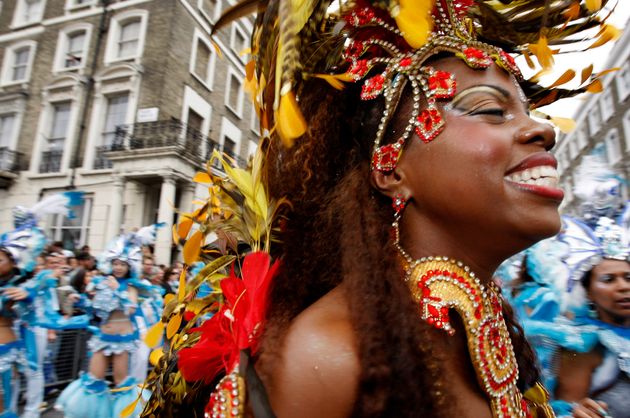 In the wake of coronavirus thwarting all of our social plans for the foreseeable future, Notting Hill Carnival 2020 is being held as a virtual event for the first time in its 54 year history.

This year’s lineup includes virtual panels discussing the political and cultural significance of the carnival and Black Lives Matter merchandise for sale. It is clear we are witnessing a return to the political roots of the festivities.

While nothing can match the vibrant energy of dancing through the streets of West London, reverberating sound systems, and a cup of rum punch in tow, the virtual event allows Black British people like me to reflect on a rich legacy of anti-racist activism, something that, this year, seems more important than ever.

Notting Hill Carnival is arguably the social event of the summer, attended by nearly two million people, from all walks of life – only eclipsed by the legendary Rio de Janeiro carnival.

For Black British people we have to consistently adhere to respectability politics to try avoid discrimination and prove our humanity. Carnival allows us to feel momentarily liberated from the constraints of systemic racism.

News reports show uptight police officers being whined on by masqueraders, a true display of British multiculturalism and “tolerance”. The atmosphere is often so joyous that it can be easy to forget the revolutionary struggle that spurred the genesis of carnival, especially given the increasing levels of commercialisation and gentrification of the event.

Notting Hill Carnival has a radical history, borne from the race riots between the newly arrived West Indian immigrants, and white working-class Teddy boys in the 1950s.

Following the economic and physical destruction of World War II, the British government formally invited Caribbean people to the UK under the British Nationality Act to help rebuild Britain.

For people like my grandparents, they were enticed by the promise of greater work opportunities, and picturesque images of the “Mother Country”. Upon arrival, the genteel childhood images of Britain were shattered as they were greeted with racial hostility and violence.

Groups such as the White Defence League patrolled the area chanting and defacing property with the slogan “Keep Britain White”, targeting Caribbean households with firebombs or faeces posted through the letterbox.

Carnival embodies the fullness of what it means to be Black and British.

In 1959, tensions came to a boil and led to a week of disturbances in Notting Hill that spread even as far as Nottingham. Political activist and founder of the first Black British newspaper, The West Indian Gazette, Claudia Jones decided to initiate the first carnival in direct response to the race relations, famously asserting “a people’s art is the genesis of their freedom”.

Although many dismiss carnival as just a raucous party with rum and women in feathers, it started as an extremely subversive and radical event borne on plantations across the Americas.

There is a great misunderstanding about the ancestral traditions and symbolism present in Notting Hill Carnival. For instance dances such as “whining” (rhythmically gyrating your hips) are frequently referred to as ’sex stimulation.’

However, this is a pre-colonial West and Central African tradition used as fertility dance or to worship deities. Chocolate Nation, a mas band notorious for smearing chocolate and paint on party goers at Notting Hill Carnival also has radical roots. This tradition known as J’ouvert comes from slave revolts in Trinidad and Tobago where enslaved people would cover themselves in oil and mud to avoid being persecuted.

In a world where footage of Black people being murdered is normalised, Black joy and celebrating the resilient spirit of our ancestors is one of the most radical things we can do.

For Black British people we have to consistently adhere to respectability politics to try avoid discrimination and prove our humanity. Carnival allows us to feel momentarily liberated from the constraints of systemic racism.

Because, after all, how far has the Black British community really come since SMS Windrush docked on our shores?

The murder of George Floyd by police officers in the United States, and the global coronavirus pandemic have amplified the stark inequalities that still exist within every echelon of our society.

A common tactic is to simply deflect and dismiss systemic racism as an “American problem”, but it is undeniable that Britain still has a huge race problem.

Whilst I am relieved that we are having these pertinent conversations, it is draining to consistently relive traumatic experiences or, even worse, argue the existence of racism.

The only time we see Black people in the media shouldn’t be to just talk about racism. Blackness is so multifaceted, to me it is joy, resilience, delicious food and so much more. Carnival embodies the fullness of what it means to be Black and British.

In fact, the virtual nature of carnival this year affords an unprecedented level of accessibility for all Black British people to connect with their culture. For those who are disabled, elderly or live outside of London, it’s an opportunity to join in the celebrations at home.

I personally suffer from anxiety triggered by large crowds, and the over policing of carnival and use of kettling techniques can make me feel overwhelmed.

Carnival is a space where partying meets the political. In a world where footage of Black people being murdered is normalised, Black joy and celebrating the resilient spirit of our ancestors is one of the most radical things we can do.

Actor Lara McDonnell on learning to fly for Artemis Fowl