In McConaughey’s words, True Detective was the “best Oscar campaigner” there ever was. He has recently given an interview to GQ magazine to promote his memoir “Greenlights.” When asked about his Oscar, he replied in a straightforward tone that “True Detective” Season 1 helped him gain a strategic advantage for the 2014 Oscar because his role of Rustin “Rust” Cohle became so popular at that time that even the pundits who decided the winner of the Best Actor award had to become biased towards him.

And he isn’t lying when he says that the role has become popular. The memes of Rustin Cohle had stormed all over the social media, his dialogues were a common witty reply in almost every other tweet, his acting garnered bewilderment of critics like never before, and by the time Season 1 had ended, Rustin Cohle had etched his name in the history books as one of the greatest television characters of all time. Even if you are one of those who have been deprived of this epic series, you must have heard of this dialogue-“Time is a flat circle.” Haven’t you? 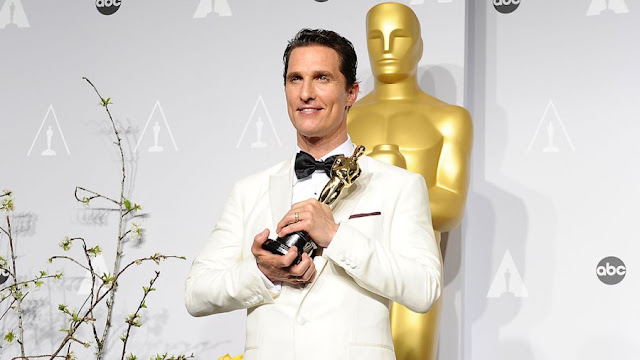 Before True Detective Season 1 hit the screens on January the 14th 2014, everybody believed that 2014 had to be Leonardo DiCaprio’s year because even though he had Matthew McConaughey of Dallas Buyers Club and Chiwetel Ejiofor of “12 Years a Slave” to compete against, his role of Jordan Belfort in the film “The Wolf of Wall Street” was regarded by many as the clear cut favorite because his fans were becoming increasingly restless due to his lack of recognition at Oscars.

However, as explained by McConaughey in the interview, everything changed after the arrival of True Detective.

The release of the HBO apogee coincided with the 2014 Oscar Season, and to be even more specific, McConaughey’s Oscar nomination also came days after the release of the series. So, people who were deciding the Best Actor award winner were bombarded with the buzz around Season 1, whose popularity was soaring at an exponential rate week after week. Furthermore, even the people walking on the streets sometimes had the imprint-“I am the Yellow King.”

Long story short, everybody in the United States knew how good True Detective Season 1 is and what the actor has done in the role of the protagonist- “Rustin Cohle.”

McConaughey firmly believes that the series was a game-changer, and if it hadn’t been released around that time, he wouldn’t have gone past Leonardo DiCaprio. “I had a True Detective in your living room every week,” he told GQ.

He also added that 2014 was the best time of his career, and it will be really difficult for him to replicate that kind of adoration ever again (which also has an internet slang given for it-“McConaissance.”)

Rustin “Rust” Cohle was an eccentric, mostly deadpan phlegmatic, and philosophically opinionated character. The character once described himself in the series “as a right fit for the job,” and you would know why you have seen the series. Season 1 explores his human struggle with a case revolving around a dangerous cult that sacrifices women for religious practices. He dedicates his whole life on the case but, no matter how dark the story was, it did end on a blissful note as Cohle finally caught and killed the “Yellow King” or “Carcosa” he was looking for his entire professional life.

Rustin Cohle’s philosophy of life has been seconded and dissected by many, but his dialogues are intriguing nevertheless. We should at least credit him for making notions like “realism,” “pessimism,” and “nihilism” sound cool.

In the interview, Matthew McConaughey also revealed how he deals with the criticisms that have been with him ever since his time after the euphoria of “True Detective” and “Dallas Buyers Club” especially in regards to the underwhelming films he has done since then, such as “The Dark Tower” and “Serenity.” McConaughey revealed that he does keep a diary of all the criticism, and while he takes the constructive ones seriously, there are some who he regards as “snarky” and “biased.”