Posted by Bill Brown from huffingtonpost.co.uk·Jul 26 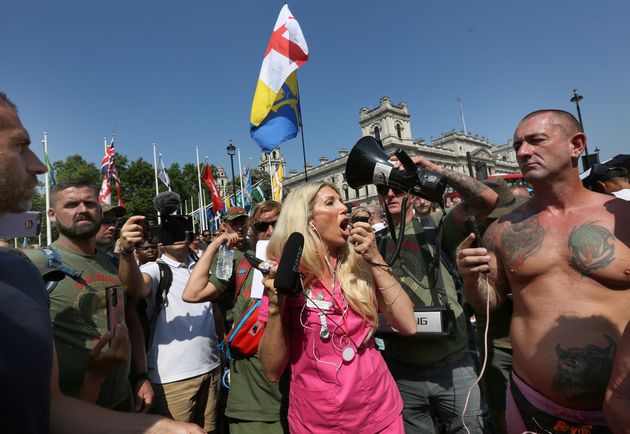 The Metropolitan Police are investigating after an anti-vaxxer used a rally in Trafalgar Square to talk about doctors and nurses being “hung” like Nazis.

Both Boris Johnson and Labour’s Keir Starmer condemned the remarks by former nurse Kate Shemirani after she used the protest to ask for details of NHS staff to be collected and sent to her.

The rant by Shemirani, who has built a social media following for her anti-lockdown and anti-vaxx views, was referred to the police by London Mayor Sadiq Khan.

In her speech to the crowd, she referred to the Nuremberg Trials, which took place after World War Two to prosecute prominent members of the Nazi regime for their role in the Holocaust and other war crimes.

“At the Nuremberg Trials, the doctors and nurses stood trial and they hung,” Shemirani said.

“If you are a doctor or a nurse, now is the time to get off that bus. Get off it and stand with us, the people, all around the world they are rising.”

A spokesperson for the Met Police told HuffPost UK: “We are aware of video circulating online showing a speech that occurred during a rally in Trafalgar Square.

“Officers are carrying out enquiries to establish whether any offences have been committed. No arrests have been made.”

Shemirani was struck off as a nurse for spreading misinformation about Covid-19.

Dear @SadiqKhan
Several of us are keen to report the individual in this video to the Prevent Radical Extremism programme. Might you direct us to the appropriate local contact for Trafalgar Square? https://t.co/4jIfGLqafV

This is utterly appalling, and I have raised it directly with the Met Police. Our NHS staff are the heroes of this pandemic and Londoners from across this city roundly reject this hate.

Earlier, a spokesperson for the PM said that the issue was a matter for the police and prosecutors but said: “The prime minister absolutely condemns those comments.

“Doctors and nurses have done a truly heroic job throughout this pandemic and continue to do so. Any violence, threats or intimidation is completely unacceptable.”

When asked by LBC whether the remarks constituted a crime, Starmer, a former director of public prosecutions, said: “Yeah.

“I do hope it’s going to be investigated and dealt with appropriately, but it was absolutely shocking.

“And some of the things that are said and done, in the names of some of these protests, I think are an affront to all of us that believe in everything the NHS and the frontline are doing.“

The Royal College of Nursing said the incident was “reprehensible and could put nursing staff at risk”.

Many NHS staff have been alarmed by the footage circulated online, and the Mayor of London tweeted that the incident was “utterly appalling”

Shemirani was suspended from practising as a nurse by the Nursing and Midwifery Council (NMC) in May this year, and struck off in June.

The NMC said she had “been using her status as a registered nurse as a way of promoting her own distorted version of the truth” and risked “putting the public at a significant risk of harm during a pandemic”.

In an interview with BBC Radio 4’s Today programme, Shemirani’s son Sebastian said that the authorities had to take action on the incident.

"My mum is definitely beyond help... It's impossible to talk to somebody when they've got that level of God complex"

Sebastian Shemirani. His mother is former nurse Kate Shemarani whose speech at a protest event has been condemned by nursing leadershttps://t.co/PvfwQrUZrzpic.twitter.com/bUSAqEECnL

Sebastian, who said he no longer has a relationship with his mother because of her beliefs in conspiracy theories, said she had mental health issues and “a God complex”.

“My mum is definitely beyond help... It’s impossible to talk to somebody when they’ve got that level of God complex.

Jamie Acourt, One Of Britain's Most Wanted Fugitives, Captured In Barcelona

Julian Assange arrested, charged with conspiracy to hack US computers

What to Consider When Buying Prescription Glasses Online

Can I Use Skin Care Spa Products Myself?