The horror film director, Mike Flanagan, is all set with his classic horror fiction. The filmmaker made the fantastic series for Netflix in 2018 titled, The Haunting of Hill House with his producing partner Trevor Macy. It is an American horror drama television series directed and created by Mike Flanagan with producing partner Paramount Television and Amblin Television for Netflix. The plot is loosely based on the novel of the same name written by Shirley Jackson. The story alternates between two timelines; it follows the five siblings who experience paranormal activities in the Hill House. The show casts Elizabeth Reaser, Michiel Huisman, Kate Siegel, Oliver Jackson-Cohen, and Victoria Pedretti as the adult siblings and Henry Thomas and Carla Gugino played the character of Hugh and Olivia Crain. The story revolves around the family of Olivia and Hugh Crain, along with their children Shirley, Steven, Luke, Theodora, and Nell. The family moved into the house to renovate the mansion to sell it and then build their own home. But due to some unexpected delays in the repairing work, the family had to stay a little longer, and they started to experience increasing paranormal activities. 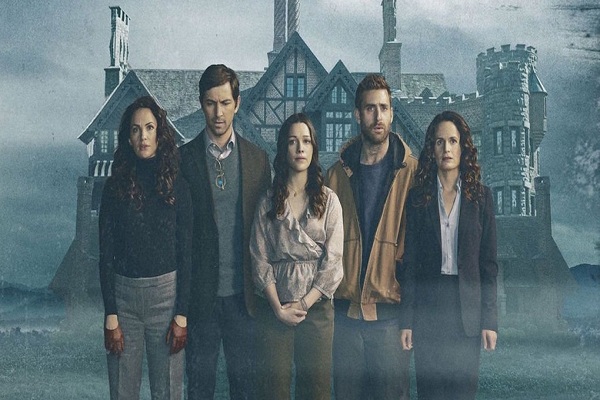 Now, Flanagan is preparing the next season of the show titled, The Haunting of Bly Manor, but the plot of the season is an entirely different plot. It is based on the novel named The Turn of the Screw by Henry James. Some of the cast and the creative team of the Hill House will be back from Bly Manor. The team is working on the production from 30 September 2019 and planned to premiere on Netflix on 9 October 2020.

The title of the show suggests the story is the classic ghost story based on James’ novel. But Flanagan said in most of his interviews that Bly Manor is just the remix of the book and it takes the central concept from Turn of the Screw. The plot follows a young governess who is hired by a man to look after his nephew and niece at his family country house. After arriving at Bly estate, she starts to experience the ghostly feeling which haunts the premises.

Although it is yet a question of how the storyline of the novel is used in the series, Bly Manor will have a bit of Henry James primer and Flanagan style of imagination in it. So before watching The Haunting of Bly Manor, the fans should check out other James tales to get some idea of the upcoming show.

The Turn of the Screw

The story of the novel revolves around an unnamed narrator along with characters who listen to Douglas while reading a manuscript written by a governess who is dead now. The manuscript tells that the story is about the young governess, hired by a man to look after his nephew and niece after the death of their parents. He lives in London and has a country house, Bly. The boy named Mile and his young sister named Flora, they lived in a summer country house in Essex.

One day Miles returns from the school after a letter arrives from the headmaster that he has been expelled. But the governess is hesitant to ask him the reason, and she is afraid that there is some horrible secret behind the expulsion.

James set up the story by someone who happened to have written an account of it. The Turn of the Screw is a multilayered story with little veils of obfuscation which leads to many questions among readers. Is governess the centre of the story or the Bly Manor’s leading lady, Dani, who is tormented by the spirits of the servants? Or is it only in her head? Although the story answers all the questions effectively and leaves the readers in a ghostly aura.

The plot of the novel follows a man after noticing the amount of work that seems to be piling around his house and wishes himself away to retreat where he could relax and take stock of his life with the help of a mysterious guest. And while reading, many questions arise in readers mind including, is this imagined, real, or some fantasy world conjured by an unseen, unknown force? Although the readers never got their answers in the book, the ghostly experiences and overwhelming modern life are palpable.

The Romance of Certain Old Clothes

In the interview, Mike Flanagan shared that he included some of the parts of the storyline from this novel of James to develop the lot of Bly Manor and the promotional photo reveals that he used the family name of “Lloyd” on gravestone which is most likely he took from this tale.

The plot of the novel follows two sisters who fall in love with the same man. So naturally, the guy has to choose among them. And in the process, he sends the sisters on different paths. The title of the book suggests the collection of expensive, elegant clothing of one sister and the overpowering desire of another sister to possess it for herself. So if you are speculating will the Bly Manor have a similar ghostly experience at the end of the story. Well, perhaps that is what is waiting in the show.

The above are a few novels written by James, which are adapted by Flanagan to create a series. The fans can roughly get some idea about the storyline and style of writing. What else the series will serve, for that fans have to wait till October release. I hope it was a fun article for you.

In a trial run, Google Chrome to corral netizens into groups for tailored web ads rather than target individuals

What to do when encountering QuickBooks Error 404?

How Customers Benefit With The Help Of VR Technology

know all about set up quickbooks web connector quickly